In honor of Mother’s Day, our momma is taking over the blog today to tell the story!

August 30, 2002 – I go out the front door in the morning to get the paper (I’m living with my mom at this time) and there, on the front porch, to my surprise,  is a mother cat with 5 kittens! Both mom and & I were off to work, so we left out food and water for the mother cat. That afternoon my sister & mom were able to get the mother cat and 4 babies inside. 4 solid black boys! They said they didn’t see any others. But I was sure there were 5! The next morning we gave the new kittens and mom a bath and flea treatment. (Our vet donated the flea treatment! Yay, vets!!)

That night after the young family had been put to bed I was upstairs when I heard a tiny meow – I ran outside – and there was the 5th kitten!!! He was hidden under the holly bush and had spent a night and a day outside alone. He was reluctant to come to me as I crouched on the ground talking to him; I couldn’t reach under the prickly holly bush. Mom went inside, got Ali and I held her next to me near the bush. The next time he cried out, Ali meowed and out he came from under the bush!! We got him inside, bedded him down with a well deserved meal and rest with his family . The next morning gave we him a bath and flea treatment. He was the only tuxedo (like his Momma). It was Frankie! As an aside, that time alone and bereft of family had a lifelong effect on Frankie; he still wanders through the house with that same  plaintive meow whenever he finds himself alone.

The kittens grew fast and Ali was a very good mother. The babies were still nursing when we found them (or did someone leave them on our door step? We will never know.) In order to tell the boys apart, they all got different colored collars.  My sister took two of the boys, Armand and Jade (burgundy and green collars). Mom kept the other three, plus Ali. 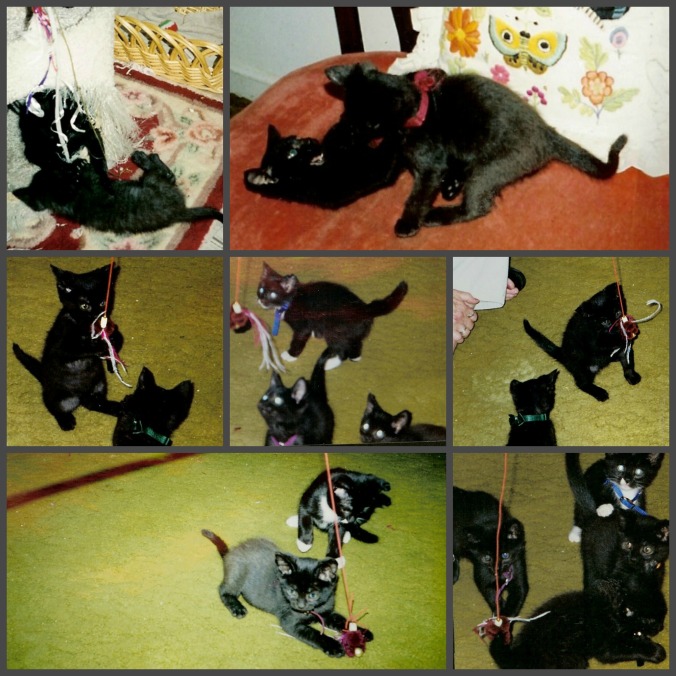 We loved these boys! They’re all angels now, with the exception of Moose and Frankie.

Mom and I take the boys to the vet for their first check up. It went well, all healthy!

My cat, Laura and mom’s other cat, Thursday, did not take well to the kittens.

The kittens grew up healthy and happy but their mom was not to see it. October 10, 2002, mom found Ali on the bathroom floor in respiratory distress. We rushed her to the Emergency Vets but by the time we arrived there it was too late, she was already gone. We were shocked by the suddenness of her death – she was fine up until the moment she collapsed. The vet performed a brief necropsy – he said that her internal organs were all out of sorts, like she had been hit by a car or fallen or been hurt on purpose. Her diaphragm had been herniated and the heart sack was infiltrated by the other organs. He said he was surprised she had lived as long as she did.

Whatever happened to her happened before she came to live with us. What ever it was she was able to make sure her babies had a safe home and that they were weaned completely before letting go of them.

We want to honor all the cat and dog moms out there who care for and sacrifice their lives for the safety of their babies.

And we want to honor all human moms who sacrifice for the safety of their children – whether those children have two legs or four – You are a special and loved!! Thank you for your Love!!!

8 thoughts on “A Kitten Story”